I just finished making the pattern Prism, which was created by Linda Pearl - what a blast to get to play with flying geese in a different way!!  My daughter and her husband were over to return the car they borrowed while they were in town so I got them to hold the quilt outside for me to take a picture! 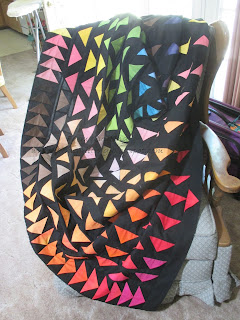 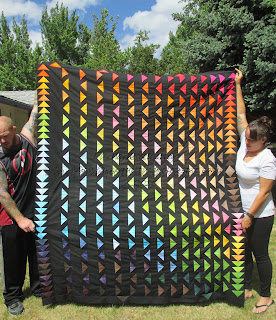 I used my hoarded ombre fabric and had fun figuring out where to put the colors.  I chose to make it a cool to warm/light to dark.  I also changed the sashing between the columns - the pattern called for 2.5" strips, I started with 1.25" and went up 1/4" with every new sashing I cut, ending up with the widest sashing being 4.75".  I also made a few too many geese and so I made up the borders.  All the geese were made with the one-seam flying geese method as demonstrated on youtube by Ricky Tims.  I'll be doing some more work on the geese, but it is nice to have a new quilt top.

I'm torn between calling the quilt "Which Way is South?" or "Escaped" for the geese in the top and bottom borders that look like they have escaped from the masses!!  Which would you go with?

Gorgeous quilt, so much color popping out everywhere! As for the name..Escaped would be my pick...or Meandering Migraters.

That quilt top turned out beautifully! Regarding the name, I vote for Which Way is South... not that I get a say in it. Have fun with the quilting!

I don't know which name I would use but this is a beautiful quilt! Enjoy her! Blessings, Gretchen

That is gorgeous! I'd go with "Escaped" for escaping insanity while you organized all of those fabulous colors.

Ooooh, whatever you call it, it's gorgeous! I'm glad I didn't have to wait long to see it. LOL Way to come back from 2 months of no sewing!

I just call it gorgeous!

Stunning. I think "Which Way is South?" is a great name for it and love the colours. I have tried to make flying geese things and I can never keep them the same size, I always end up with some which are smaller!!!! Will have to keep practicing! Hugs, Susie xx

Just found your site from Sew Cute Tuesday and have to comment! This quilt is amazing!!! I love flying geese and your ombre fabric and the placemnt of the geese and the varying size of the sashing strips is just genius!!! Just stunning!!!