A Lovely Year of Finishes - November 2015

Yippee!!  I got my granddaughter's quilt finished and met my goal with Sew BitterSweet Designs for November!  It was fun to quilt using what I call "topography" quilting for the filler behind the fairies.  A little different from McTavishing as that has fewer repeats before you change direction - great on an adult quilt, but this is for an 8 year old, so a little larger, more repeats "topography" for her! 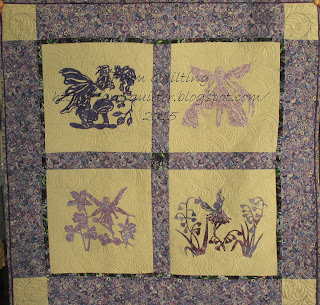 Here are the individual blocks: 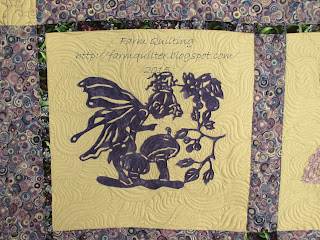 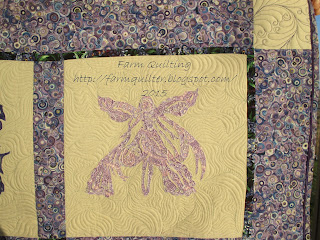 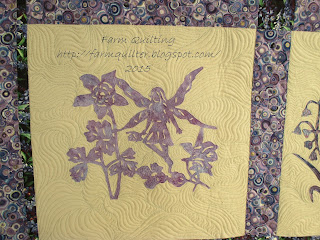 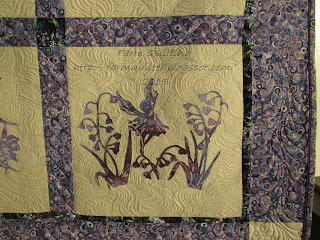 I finished Fairy Garden with a faux piping binding and sewed it down with my sewing machine.  Here is a picture of the back 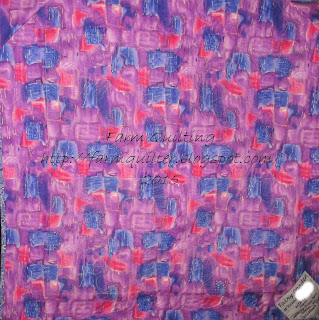 I love the colors in this fabric...even a bit of metallic for sparkle!  I fuzzed out her last name, just cuz that's the way I roll!

On the top corners of the wall hanging, I put triangles of fabric so it will be easy for her mom to put a dowel and hang it up on a single nail. 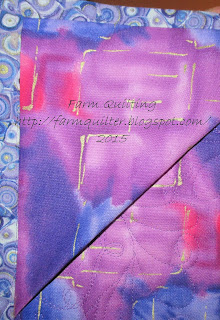 I prefer these over sleeves for two reasons - one nail hole verses 2 (and trying to get them level!) and I don't have to do a bunch of hand sewing to keep that sleeve out of sight!  Just sewing on the label makes my hands ache.

Did you make a goal for November?  Did you reach that goal??  Celebrate!!!

Kevin Got His Quilt

A few months ago, Kevin of Kevinthequilter fame, sent me a quilt to quilt for him...of course, it is a QOV because that cause is near and dear to his heart!  This quilt was so much fun because it only had 4 traditional blocks and those little puppies were on the corners of the borders!!  Modern quilting, here we go!! 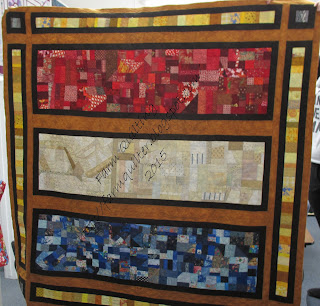 See those little gray/blue stings bound by black?  Those are the only "blocks" in the quilt!!  Kevin had a blast piecing crumbs to create the panels...I know, some folks wouldn't call them crumbs, but at my house, most of them would have ended up inside a pet bed!!  Those panels don't lend themselves to point-to-point quilting, so I did what I wanted until I got bored or tired of doing it and switched to a different pattern!  Hard to see, but I centered a U in the red panel, S in the cream and A in the blue.

The backing was cool too: 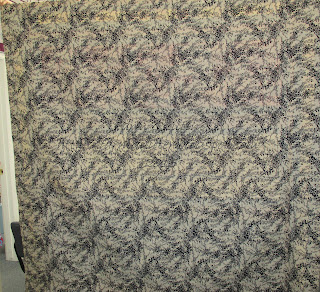 Great movement just in the pattern of the fabric.

Here are some close-up shots of the quilting in the red: 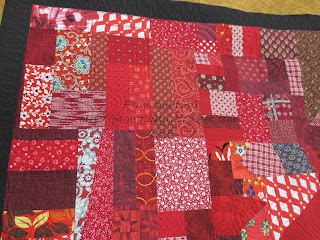 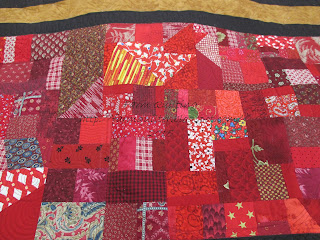 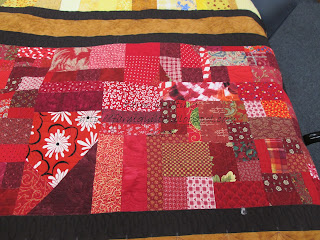 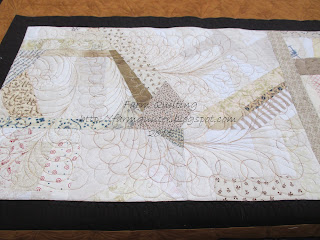 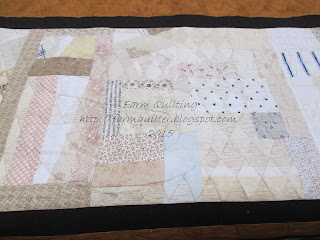 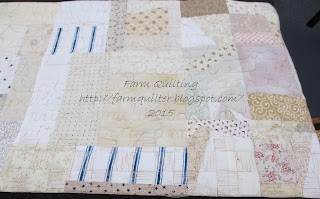 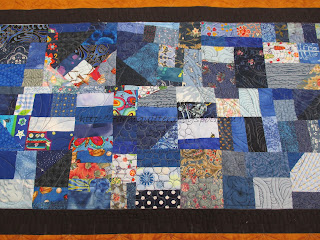 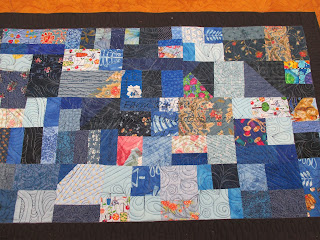 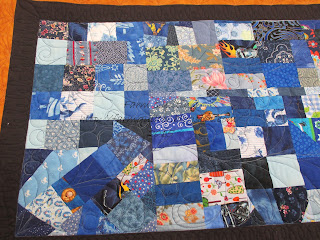 Finally the borders and sashing: 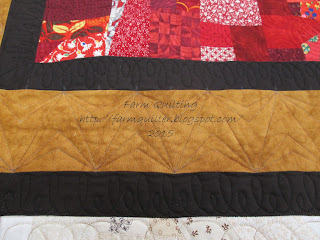 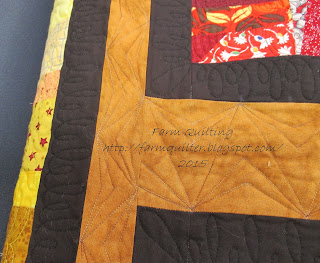 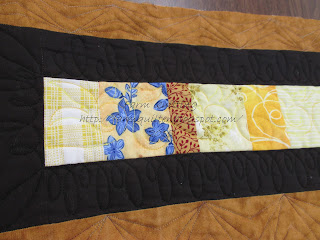 This was a fun quilt to quilt and I love being told to do whatever I want with the quilting!!  I can't wait to see what it looks like when he gets the binding on!!!  Since he is currently between homes, not sure when he will get it finished, but he was happy when he got the quilt last week!

Thanks, Kevin, for letting me have fun with your quilt!!

I Was the Lucky Winner

I was the lucky winner, chosen by Lindsay of http://www.lindsaysews.com/ of all these lovelies: 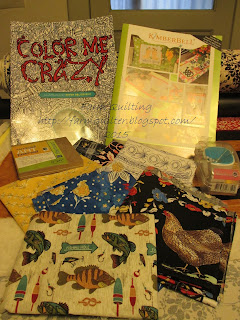 I received 7 fat meters, a craft block, Color Me Crazy (is everyone on the cool coloring band wagon?), a pattern book with 10 adorable patterns in it and a wrist pin cushion!  Thank you so much, Lindsay!!!  I love everything!  Now I just need to figure out how to open the plastic box containing the pin cushion!!!

Since I made my October goal just under the wire, I have a new goal to get a wall hanging quilted and bound for my granddaughter for Christmas.  This way it will be there on time!! 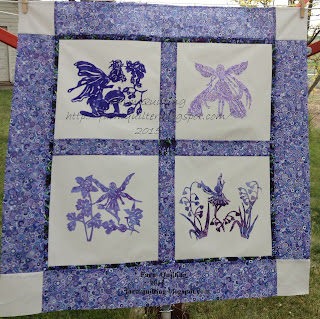 She loves purple and adores fairies so I made this little beauty for her.  I pattern tested this pattern for Willow Bend Creations.

They specialize in laser-cut applique, but for this I got to draw out the patterns, fuse the fabric and cut out every little, teenie piece!  I love how this turned out, but I would definitely buy their laser-cut patterns in the future.  Let's just say, my hands were killing me by the time I was finished!!!

I am linking up with Sew BitterSweet Designs for the ALYOF for November. 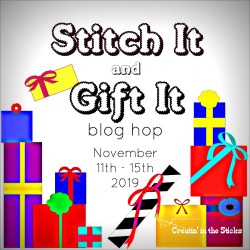 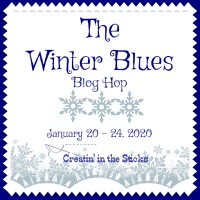